“When Vesta Tilley is on the Bill You Had Best Book far in Advance…” Or: The Incredible Vesta Tilley: A Guest Post By Nancy Bruseker:

There are some names which reappear, time and again, in discussions of British music hall.  One of those names is Vesta Tilley. She topped the bill in the biggest and best music halls for decades, and her final tour before retirement culminated in the presentation of three volumes of signatures from fans from around the world.  She played in cities and towns around the , and also took her act overseas, where she was equally feted for her performances. And yet, why she was so popular and successful in her time is little considered. Thus, herewith an introductory reappraisal of her life and work, and what her fans had to say about this extraordinary performer.

Vesta Tilley was one of the best known of the British ‘Golden Age’ music hall stars.  She was born Matilda Powles in 1863 in , and started perform on stage at the age of 3, as her father, Harry, was the chairman (the master of ceremonies, say) of the local music hall.  By day, he was a ceramics painter, because even then, the local entertainment scene didn’t necessarily put food on the table. The Powles family - or Ball, as they sometimes called themselves - were working class in their circumstances.  When Matilda - or Tilley - was born, they were living in cramped inadequate housing, moving around the country as the family grew. 'The Great Little Tilley' was an immediate success, and by the age of ten, she was serving as the main breadwinner for her family.  It meant being on tour with her father for months at a time: no time for formal schooling! On tour together, Harry served as her manager, as well as performing on the same bill as her with Fatso, the family dog, who could apparently do tricks.  Later, several of Vesta’s siblings would join her on stage, always billed as 'Vesta Tilley's sister/brother'.  She was, throughout her career, the star of the show.

Vesta’s act - or turn, in the parlance of the time - was that of a male impersonator.  That is, she dressed up in men’s clothes, and then sang songs which were from the man’s point of view while doing some limited choreographed movement. 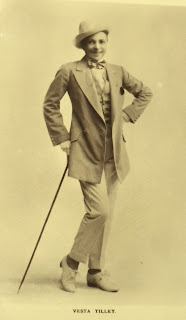 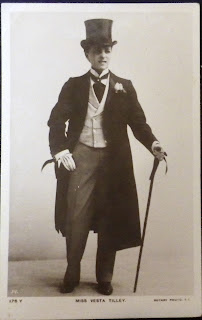 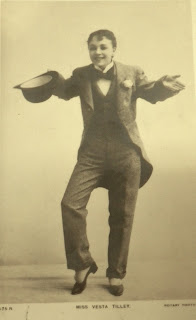 This choreographed movement was very carefully studied; for example, when she decided to take on a soldier's persona, she spent hours in train stations, watching them move, in order to accurately mimic them on stage. 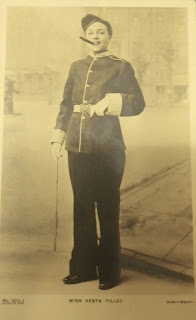 While she was extremely particular about every aspect of her mannerisms and her costume, down to the cufflinks, her hair was always covered by a wig, she made no effort to alter her voice.  The has made some wax cylinder recordings available, so if you'd like to hear her, you can do so by clicking here:

Unfortunately, because her act was an audiovisual experience, listening to the recordings is an incomplete encounter.  Further, while she appeared in a film tailored very much to her act, no known copies of this film - The Girl Who Loves a Soldier - survive.  Instead, we have to rely on contemporary descriptions of her performance, such as that offered by W.R. Titterton.

When Vesta Tilley is on the bill you had best book far in advance, or you may tip-toe disconsolately at the back of  the ‘standing room’, and catch but a stray glimpse of the goddess through the bobbing leafage of ladies’ hats.  Say you have been wise and have got a seat in row D of the stalls, where you will not lose the slightest of her gestures. You have dozed through clown and conjuror and operatic antique. … And now…

Almost before you have looked at your programme the electric-lit numbers that flank the footlights have twitched and changed, and the band is playing a merry dancing chorus you know.  A ripple of applause grows to thunder and dies away in the gallery. … And the orchestra plays the chorus through again, for Vesta Tilley, artful fellow! loves to keep us waiting and expectant.

There is the low buzz of a bell, the conductor bends to his orchestra, the chorus starts again, and a dapper young man in an exquisite purple holiday costume strolls from the wings leaning on his bending cane.  He comes to the centre of the footlights, and poses with crossed legs and staring monocle, the features deliciously quizzical and inane.  It is a perfect picture - perfect in colour and composition, the quintessence of seaside dandyism; but for a subtle hint of womanly waist and curving hip you might fancy it indeed a round-faced boy.  Even so, you are doubtful.
And then the picture speaks, and the illusion is piquantly broken - or, rather, the optical illusion continues, only there is another person present - the woman artist who unfolds the tale.

In deliberate confidential recitative she tells us of Bertie, the thirty-bob clerk, who sweats in a London office for fifty-one weeks of the year, and for this one blessed week is lording it on the Brighton promenade as the mashaw (and she shoots her cuffs) -er - Claude de Vere.  Exquisite caricature!  Every gesture is right; every tone is right - striking the delicate chord between irony and burlesque; and there is no weak exuberance, everything is done with a fine virile restraint.  These are not quite the gestures a dandy clerk would make; they are better than that - they explain him, laugh at him, justify him.  They have all the deep truth of uncynical humour.
And the gestures move to rhythm- the strut, the cocking of the hat, the dusting of the clothes and boots with the purple handkerchief, the throwing of stones into water from the pier-pier-pier, all the ironic melody controls.  Is it a dainty, flitting butterfly you are looking at or an affected fop?  Perhaps, seen from this proper distance, they are the same.

How sure the singer is! How despotically she rules over her audience - dallies with the rhythm, draws it out, pauses in mid-gesture, the hand in the air, the monocle nearing the eye - pauses perilously long, you get uneasy, the bicycle goes so slow you are afraid it will topple - it almost does, but in good time the chorus comes to its conclusion with a ‘My word!’ and one dainty feminine hand slaps the other, and the body wriggles into itself with a foot up.  ‘My word! he-is-a naugh-ty boy!’  O Tilley!

Titterton’s description, with the slippage of pronouns and gender identifiers, marks an important aspect of her performance.  While Vesta’s drag act of the turn of the last century did not mean anything like what a drag act would mean now, that doesn’t mean it wasn’t ‘queer’ in the old-fashioned sense of being a bit odd.  While British society perfectly accepted cross dressing as part of entertainment - some have even said that it seems to be a peculiarly British obsession - there is nonetheless something odd that happens with Vesta in particular, and impersonation acts in general.

In Vesta’s case, one of the odd things is just how her fans react. For reasons that have not yet been fully explained, Vesta’s fan base was notably dominated by working class women, a fact which Vesta prided on sharing in interviews in newspapers, and reflects her collection of fan mail, which is heavily weighted towards that group.  We get a view in, thanks to the fantastic collection of scrapbooks she made and kept throughout her career, into which she pasted newspaper articles, photographs, and the letters she got from innumerable fans.  Arguably, Vesta’s historically working class roots made her connect more with those fans, and those fans in turn, connect with her.  But there’s something about how Vesta takes on the roles of these men - clerks trying to be a Big Noise while on holiday, messenger boys, rich dandies, soldiers, sailors - on stage, where she parodies their mannerisms and pokes (gentle) fun at them as a group - which can be read as quite empowering for the women in the audience.

Just to be clear - Vesta Tilley was very very very good at what she did, and in her time, Madonna levels of famous.  In the 1890s, she was the highest paid woman in and she toured the six times (ODNB).  While there is very obviously a transgressive element to her performance, she stayed on the right side of the line in terms of comedy, and causing offence.  In part, this was helped by her very strict view as to innuendo - comparing her material to her peers (such as Marie Lloyd) her songs had none  - and her equally strict adherence to feminine attire off stage.  She made it nearly impossible for anyone to criticize her choices - in comportment, in performance, in choice of career.  Though she never had children, she comes quite close to ‘having it all’, as we modern women are meant to do.

Returning to her fans, then… it’s quite clear that they were inspired by her career and life.  Her autobiography notes that many of them named their daughters after her, and the correspondence supports this. Others talk at length about how they - her female fans - made sure that their daughters knew about Vesta Tilley.  Many more still talk about going to see her perform with a group of other women, coworkers in a number of cases, no doubt friends in many others.  These letters are a series of blog posts in their own right!

For now, it must be understood that here was a woman - who no one doubted was a woman, who everyone understood as feminine - who simultaneously set her own agenda and was emphatically the primary agent in her own life.  That she did this by (literally) taking on masculine roles - and then making fun of them - even today sounds incredibly daring and subversive.

In the end, Vesta had more than fifty years on the stage, retiring in 1920 at the age of 56.  By this time, she was Lady de Frece, courtesy of a knighthood for her husband’s war work during the First World War.  She lived another 32 years, half the year in , half the year in , relaxing and compiling the scrapbooks which now form the basis for my research into her fans.  She’s buried next to her husband in ,

Nancy Bruseker is a PhD student at the University of Liverpool passionate about audience research, history, and just about any kind of music. Find her on Twitter @acanancy and browse the history of musical entertainment on her blog, theauralwoman.blogspot.co.uk

Posted by The Amateur Casual at 02:47