“A London of Horse Trams with Halfpenny Fares, and of Hansom Cabs; of Crystalline Bells and Spattering Hoofs” Or: The Victiorian Era Remembered by Those Who Were There:

“This Mysterious Figure Was That of the Present Writer. He was bound for Lambeth Workhouse…” Or: Lessons in Investigative Journalism for Public Interest:

With the furore currently surrounding the Murdoch press, phone hacking, blagging and the extinction of the News of the World, the ability and integrity of British journalism is being placed under the most severe scrutiny and called into question.

Whilst I was never a particular fan of the News of the World (in truth, I have never really ‘taken’ any specific paper) from a purely Victorianist point of view, it is sad to see the cessation of an institution that began in 1843, just as it is sad to see anything with links to the Victorian age cease to be.

Whilst true investigative journalism appears to have largely been replaced in this country in favour of re-hashing press releases from media corporations or celebrity agents, I though it the perfect time to return to the birth of investigative journalism and the beginnings of the tabloid press in the UK. To do this, we shall be looking at the Pall Mall Gazette, and first, must go back to 1865.

The editor of the Pall Mall Gazette at this time was Frederick Greenwood, and, wanting a sensational story that would shock the public, and having a younger brother, James Greenwood, (My Victorian hero, about whom I blogged last year, here) who was a journalist, he put the two together, and suggested James spend the night in the casual ward of a workhouse.

They chose Lambeth workhouse, in London. Frederick dressed his brother in shabby clothes and together they climbed into a brougham and headed for Lambeth. James Greenwood takes up the story:

At about nine o'clock on the evening of Monday, a neat but unpretentious carriage might have been seen turning cautiously from the into , Lambeth. The curtains were closely drawn, and the coachman wore an unusually responsible air. Approaching a public-house which retreated a little from the street, he pulled up; but not so close that the lights should fall upon the carriage door; nor so distant as to unsettle the mind of any one who chose to imagine that he had halted to drink beer before proceeding to call for the children at a juvenile party. He did not dismount, nor did any one alight in the usual way; but the keen observer who happened to watch his intelligent countenance might have seen a furtive glance directed to the wrong door: that is to say, to the door of the carriage which opened into the dark and muddy road. From that door emerged a sly and ruffianly figure, marked with every sign of squalor. He was dressed in what had once been a snuff-brown coat, but which had faded to the hue of bricks imperfectly baked. It was not strictly a ragged coat, though it had lost its cuffs - a bereavement which obliged the wearer's arms to project through the sleeves two long inelegant inches. The coat altogether was too small, and was only made to meet over the chest by means of a bit of twine. This wretched garment was surmounted by a “birds-eye” pocket handkerchief of cotton, wisped about the throat hangman fashion; above all was a battered billy-cock hat, with a dissolute drooping brim. Between the neckerchief and the lowering brim of the hat appeared part of a face, unshaven, and not scrupulously clean. The man's hands were plunged into his pockets, and he shuffled hastily along in boots which were the boots of a tramp indifferent to miry ways. In a moment he was out of sight; and the brougham, after waiting a little while, turned about and comfortably departed.

As a little footnote on the News of the World, Frederick Greenwood, aforementioned editor of the Pall Mall Gazette, met newspaper proprietor George Riddell, and in the course of conversation Riddell said to him, "You know, I own a paper." "Oh,” Greenwood replied, “do you? What is it?" "It's called the News of the World, I'll send you a copy," replied Riddell, and in due course did so. Next time they met Riddell said, "Well Greenwood, what do you think of my paper?" "I looked at it," replied Greenwood, "and then I put it in the waste-paper basket. And then I thought, 'If I leave it there the cook may read it'—so I burned it!”

I'm sure many have shared a similar opinion over the years.
Posted by The Amateur Casual at 23:17 9 comments:

“Suffer Little Children to Come Unto Me, for of Such is the Kingdom of God” The Victoria Hall Disaster of 1883

One week after the event, on Saturday 23rd June, popular illustrated weekly newspaper The Graphic carried engravings on its front page, depicting the inside of Victoria Hall whilst Mr. Fay was performing, showing the two tiers of children above those on the ground floor, and also showed an engraving of the actual staircase down which the children poured, including the door.
The front page of the paper can be seen below: (Click to enlarge) 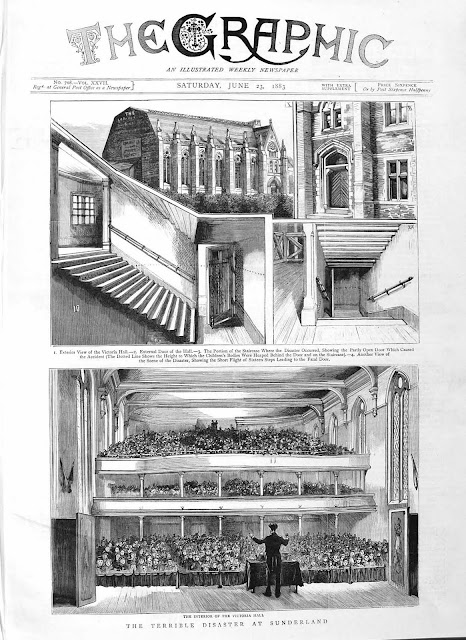