“A Texas Tale of Love and Mystery: Or: Book Review: The Herbalist’s Apprentice by Rosa Morgan Lockwood:

Last year, for the first time, I decided to record a list of all the books I had read over the course of 2011. I have typed up the list below, and as you may observe, I do not waiver much from the Victorian stuff; all of it is either written by Victorians or set in Victorian England, and specifically the hub of the Empire; London.

Then, in June last year I wrote a blog post about the Statue of Liberty, the famous landmark that stands in , having been given to the to celebrate their centennial by . In the post I wrote that I always struggled to come to terms with in the nineteenth century. I don’t know why, but I could never think of the in that era without thinking immediately of cowboys and Indians and towns full of saloons and pale riders. In a quest to correct me, Rosa – an author and blogger from – contacted me and told me she had just finished writing a novel set in in 1850, and would I like to read it to try and broaden my nineteenth century American horizon. I said I would very much like to read it, having never read anything set in ‘Victorian’ before. I also agreed to write a review after I finished – something else I have never done before, and I doubt the nation’s entertainment critics will be fearing for their livelihoods just yet…

The book was ‘The Herbalist’s Apprentice’ and I was reliably informed that ‘Herbalist’ carried a silent ‘H’. 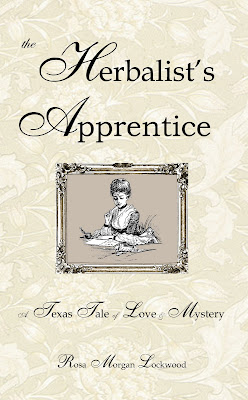 Within a week I received my signed copy, and looked at it with a kind of strange foreboding. What was I hoping for? I was hoping for a book with a good story, first and foremost, and secondly, I was hoping to ‘experience’ 1850’s as best I could. So, having finished the book I was currently reading, I picked it up and began.

Predictably, I felt like I was in a foreign place, and for the first five or six pages was overcome with a strange feeling of homesickness. (Bizarrely, in my mind I was wondering how preparations were going in for the Great Exhibition of 1851. Probably, I thought, to try and get the era into context, since the usual clues, such as slang or familiar buildings or streets were not present.) Speaking of slang, another strangeness that fueled my homesickness was the accents of the characters, some of whom, of course, in my mind spoke with a Texan twang. At first, these kept slipping, but after a chapter or so, my inner reading monologue was set firmly to ‘Texan’ for the characters that required it, and it came a little easier.

Onto the actual book then, and I best shed a little light on the story, here is the description from the back of the book:

At seventeen, Mia is bursting with questions about love and life, but none are more pressing than the lavender scented memories concerning her mother's mysterious death. Against her father's wishes, she secretly visits Mosswood, the palatial home of the nefarious Captain Biggs, where she becomes entangled in a web of deception.
Should Mia trust the captain's dashing son, Daniel, whose sincere and refined manners win her heart?

Or should she trust the rugged Frenchman, Henri, a Galveston Customs Officer, who is investigating the Biggs family, and whose seductive ways sweep her off her feet.

Desperate for help and guidance, Mia turns to the one person she can trust; Miss Emily, a freed mulatto slave who dispenses pearls of wisdom as adroitly as her herbal tinctures. Apprenticed to her in the art of healing, Mia begs her for the truth behind all the secrets.

When the past and it's mysteries are finally revealed, what dangerous steps will this impetuous young woman take to find justice?

I enjoyed the story, and the questions posed above are answered with great satisfaction in the final chapters as the story builds and comes to a head. The thing that came across to me most was the sense of sultry, dusty Texan heat, but this feeling was conveyed not by a flurry of adjectives, but concealed within paragraphs that subtly suggested that it was hot and dry and dusty. The atmosphere created was impressive, and certainly helped to set the sense of place for a luddite like me, who needed all the help he could get to be hoisted out of his nineteenth century rut.

Reading ‘The Herbalists Apprentice’ was a new experience for me, but it’s not simply for that reason that I would recommend giving it a read, but because its an effectively atmospheric and immersive story, which sweeps its skirts gently along the warm and dusty roads of 1850’s Texas, until, before you know it, you find yourself in the centre of an intriguing mystery.

Rosa Morgan Lockwood blogs at http://thevictoriantimes.blogspot.com/ and can be found on Twitter @VictorianTime
Posted by The Amateur Casual at 22:49 2 comments:

D.O. Hill and Early Photography: Or: A Guest Post by Alison Bacon:

“Like Painting the Forth Bridge…” Or: The Greatest Victorian Bridge, Finished at Last…For Now:

Recently, on the 9th December 2011, the perpetual painting job on the magnificent Forth Railway Bridge in Scotland was at last completed. here is an article from BBC News heralding the end of this task
Originally, a bridge designed by Sir Thomas Bouch was going to cross the Firth of Forth and connect Edinburgh to Fife, but the tragic disaster that befell one of Bouch’s earlier bridges, the Tay (read about that disaster here) meant that the project was suspended, and eventually taken away from him altogether after a public enquiry found that he had utterly mis-designed the tragic Tay Bridge.
The Forth Bridge project was given instead to civil engineers Sir John Fowler (who had worked on the metropolitan underground line in London) and Sir Benjamin Baker (who had transported Cleopatra’s Needle from Egypt to London), who designed the fantastic bridge that stands to this day.
The building and construction was carried out by Glasgow engineering company ‘Sir William Arrol & Co.’ and this project was groundbreaking in a number of ways;
Firstly, it was the first bridge in Britain to be made entirely of nothing but steel – a relatively unknown quantity when it came to bridges – If the Forth Bridge is compared to another bridge designed in the same decade – Tower Bridge in London, the immediate thing that is noted is that the Forth is a fairly sparse looking structure; there is nothing showy to it, is not dressed up with cladding, it is 100% function, 0% aesthetic, and in being so (in my opinion) becomes 100% both, and I can think of no Bridge in the country as industrially picturesque.
Secondly, when the bridge opened in March 1890, it was the longest single cantilever bridge in the world (though it was overtaken in 1917 by the Quebec Bridge) and was Britain’s first cantilever bridge, but these records were not made simply for the sake of it; as with the appearance of the bridge, they were purely functional.
Following the Tay disaster, public confidence in railway bridges was significantly damaged. The under-engineering of the Tay had given such structures a fearsome reputation, and to remedy this, Fowler and Baker knew that the Forth had to be the biggest and strongest bridge ever seen to restore confidence in railway bridges. The design they came up with was that of a cantilever. The strength of this design was demonstrated by co-designer Benjamin Baker at a lecture. The demonstration is shown in the picture below:

Behind the people is a photograph of the bridge, and in front of that, people act as a human version of the structure, to the same scale as the photograph of the bridge, so the men in the chairs on either side represent the vertical piers directly above them on the photograph, and the bricks next to them assume the role of the anchor piers at each end of the bridge.
The arms of the men in the chairs are supported by wooden beams held in their hands and butted against their chairs, and the tops of the two outermost ends of the beams are steadied by ropes attached to the anchor piers (or bricks) A little platform in the centre of the picture is suspended between the top ends of the wooden beams held by the inner hands of the two men.
This cantilever arrangement provided the perfect balance of forces, and supported the weight of the man sat upon the centre platform with ease. This human version of the bridge perfectly demonstrated that the bridge was well supported enough, and strong enough top cope with rail traffic.
During the building, which lasted from 1883 to 1890, five thousand men worked on the project (most of whom were foreigners) and during the seven-year build, fifty seven men died, the youngest being just sixteen years of age.
The Bridge, which was opened by the Prince of Wales upon its completion, was one of the great Victorian achievements. It was, however, quite high maintenance, and needed constant painting. In those days, and right up until forty or fifty years ago men without harnesses or safety equipment and with nothing but a flat cap on their heads climbed the steel structure with a tin of paint and a brush, coating the bridge with paint from one end to the other, and then turning around and going back again. As the article states, this task will not need to be done now for another twenty or so years due to the paint used, which sounds the death knell on the metaophor ‘like painting the Forth Bridge’ to describe a never-ending or thankless task…
Posted by The Amateur Casual at 02:42 9 comments:

Email ThisBlogThis!Share to TwitterShare to FacebookShare to Pinterest
Labels: Engineering, Forth Bridge, Industry

The Child Doomed to a Doll-Less Existence Has an Injustice Inflicted on Her for Which no Other Education can Effectually Compensate: Or: The Importance of Giving Children Toys: 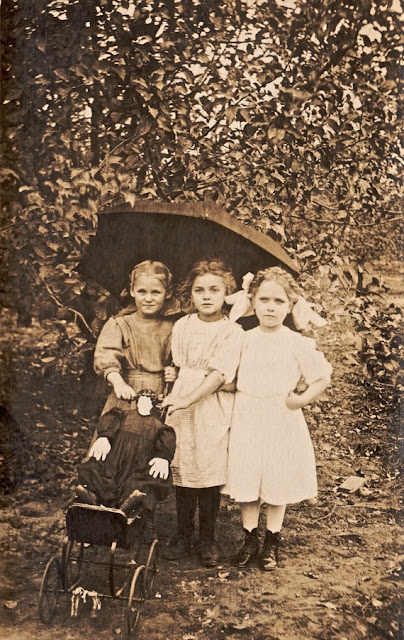