“…I Have Never Excited in Anyone a Desire to Forget Themselves…”Or: The Short and Melancholy Life of Amy Levy:

The Victorian era is absolutely littered with talented individuals who, for some reason or another, become forgotten and lost in the midst of time until they either become ‘fashionable’ – as is often the case with artists of the era – or are gradually discovered by wider modern audiences, who give these people posthumous publicity and they are recognized as the talent that they deserve to be.
One such person, who was brought to my attention recently, is the poet and writer, Amy Levy.
To be described by Oscar Wilde as a genius is not a compliment to be taken lightly, and in the periodical, Women’s World which he edited for a couple of years, he published enough of Amy’s short stories and poems to know what he was talking about.
Amy Levy was born the second of Lewis and Isobel Levy’s seven children in Clapham, , in 1861. The Levy’s were a middle class Jewish family, her father was an export merchant, and sent Amy to school in Brighton, where she studied at Brighton High School.
Amy began writing at a very young age, and, as many aspiring writers of the time did, she sent her poems and short stories to the editors of various periodicals. The Pelican, a feminist journal, had published within its pages Amy’s poem, ‘The Ballad of Ida Grey’ and the previous year, she had contributed several literary reviews to the young person’s magazine, Kind Words.
The Headmistress of Brighton High School was twenty-one year old Edith Creak, a graduate of in , and one of its first ever female pupils. Amy greatly admired Miss Creak, and developed an intense passion for her Headmistress.
After leaving high school, Amy followed in Miss Creak’s footsteps by attending , where she became their first Jewish student in 1879 at the age of eighteen. By now she already had a small body of published work behind her, and whilst she was at college, published a collection of poetry; ‘Xantippe and Other Verses’ in 1881.
When she left Newnham after three years, she traveled across Europe, often returning to to spend time with her family, who by now had moved to , in North West London.
Her writings continued to appear in many and various periodicals, from The Jewish Chronicle to the Pall Mall Gazette, and in her social life, she had become friends with fellow literary and political peers such as Clementia Black (who would go on to become a member of the Women's Trade Union League, and in 1886 would become its honorary secretary) Amy was also good friends with daughter of Karl Marx, Eleanor, novelist Olive Shreiner and playwright George Bernard Shaw. She also started to mix with followers of Charles Darwin and his revolutionary ideas, as well as people in favour of eugenics, such as statistician Karl Pearson (credited with establishing the discipline of mathematical statistics) She began to move in a social circle far different from that of her conformist Jewish family, and struggled to straddle both worlds, continually finding herself stuck in the gap between the two.
‘A Minor Poet and Other Verses’ was published in 1884, and contained sad and melancholy poetry, mostly upon the subject of death and suicide.
In 1886 Amy was in Florence, where she met writer Violet Paget (Better known by her pseudonym of Vernon Lee, under which she wrote supernatural fiction, as well as essays on the arts) Violet was a lesbian, and was involved in a relationship with poet and writer Agnes Mary Robinson. Amy soon fell in love with Violet, and upon her return to England would send her many letters, but Violet, it seems, did not love Amy, but, as she admitted in letters send to her mother, (“…I don't love her, but she's a poor little person and clever and can talk poetry...”) saw her more as a friend and someone to pass the time with.
In 1888 Amy’s first novel was released, entitled ‘Romance of a Shop’ it was published in ‘Woman’s World’ and described by its editor, Oscar Wilde as:
“…the adventures of some young ladies who open a photographic studio in to the horror of some of their fashionable relatives . . . the book is admirably done, and the style is clever and full of quick observation. Observation is perhaps the most valuable faculty for a writer of fiction…”
‘Romance of a Shop’ is essentially the story of four young ladies who, following the death of their father open a photographic studio in bohemian , which disappoints their prim and proper relatives. The story explores the differences between the well established Victorian lady, happy (or not) to be kept at home by her husband and bound by social and moral codes of conduct, and the ‘new women’ who began to spring up in the late 1870’s – women who did not take husbands and went out and earned their own money by doing jobs. (The phrase ‘new women’ did not become widely used until the 1890’s, when famous novelists included ‘new women’ in their books, most notably, George Gissing’s ‘The Odd Women’)
The following year, Amy’s second novel was published, ‘Reuben Sachs’, which shone a light upon the lives of the Jewish community in London, which had had a romantic veil thrown over it by George Eliot in her final novel, ‘Daniel Deronda’, in 1876.
The character of Reuben Sachs is a young Jewish man living in a Jewish community. A brilliant political career awaits him, but he must marry a wealthy woman to support himself. Reuben, however, is in love with a poor girl, Judith. The community surrounding Reuben and Judith snobbishly gossip about them, and the novel criticizes societies requirement for women to marry, and for people with ambition to marry into money. 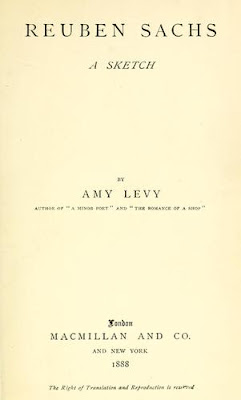 Its criticism of the codes and morals of polite society caused controversy when it was first released, as well as its harsh, unblinking view of claustrophobic Jewish communities.
Oscar Wilde confirmed:
“…its uncompromising truth, its depth of feeling, and above all, its absence of any single superfluous word, make it, in some sort, a classic.”
To this day it remains Amy’s most successful novel. However, whilst she was enjoying literary success, her young body, now only twenty-seven years old, was failing her. She suffered from numerous abscesses, eye infections, painful neuralgia and, by now, worsening deafness. Whilst in in 1880, she had written home to her sister, whilst seemingly in one of her dark and self-loathing moods, saying:
“I write to you out of the very depths of affliction brought on by a diseased body. God must love me awfully for he chasteneth me without cease ... Really if this confounded neuralgia don't stop I shall have to go to a chemist - no, not a chemist - the river; for the German chemist is alas! not permitted to retail the death-fraught drug to the chance customer.”
Throughout her life Amy was never happy with herself. Ever since she had studied at she had attempted to ‘be’ Edith Creak. The fact that she was not caused her to supper bouts of depression. She was unhappy with her looks, too, thinking herself ugly and unattractive. Also from , she wrote to her mother:
"There won't be any impropriety in my teaching any number of young men… I have never excited in anyone a desire to forget themselves."
In the summer of 1889 she holidayed in a cottage in Dorking, with a friend. Here, they spent some time with the science writer, novelist and advocate of the theory of evolution, Grant Allen and his family, who lived not far away, in Haslemere. They spent time walking and talking, and Amy seemed apparently happy. She returned to London and in the early hours of the 10th September, she locked herself in her bedroom and lit a charcoal fire in the grate, from which she breathed in carbon monoxide until she died, aged only twenty-seven.
The coroner’s report states that Amy Levy died of ‘Suicide when of unsound mind.’ Did Violet Paget think the same? Writing from to a friend she shared with Amy, she wrote:
“…Poor Miss Levy! The truth has little by little dribbled out. She killed herself with charcoal ... But she had every right: she learned in the last 6 weeks that she was on the verge of a horrible and loathsome form of madness apparently running in the family”
That Violet Paget did not reciprocate the affection Amy felt for her is quite clear here.
But Amy had a bright future, so why did she commit suicide? Was it the pain she was in, either physically or emotionally? Was it depression? Was it the struggle to fit in to two very different worlds? The reasons are unclear, and yet the fact that her death was a tragic waste is perfectly plain.
It is only really in the last ten years that Amy Levy’s life and work have been looked at in more detail, and in between the release of Linda Hunt Beckman’s ‘Amy Levy: Her Life and Letters’ in 2000, and ‘The Woman Who Dared: A Biography of Amy Levy’ by Christine Pullen, released in 2010, there are a couple of re-releases of Amy’s work, including ‘Reuben Sachs’ in 2001 by Persephone Books, who re-print largely forgotten but important work from mainly female authors of the late 19th and early 20th centuries, and a similar publisher, Black Apollo Press, re-printed ‘Romance of a Shop’ in 2005.
Also in 2010, the book ‘Amy Levy: Critical Essays’ was released, but prior to these, I can see only one release, from 1993; ‘The Complete Novels and Selected Writings of Amy Levy, 1861-89’. Perhaps there are others, but these are the only ones I could find.
Like so many of the great talents of the Victorian Era, Amy Levy was lost to us for over a century, until she began to make a posthumous comeback in the last decade, her work being of enough cultural importance – especially her criticisms, chronicles and portrayals of the Anglo-Jewish communities of the nineteenth century – for people to research it and re-publish it. How many other lost Victorian talents and treasures will be unearthed over the coming decades?

Posted by The Amateur Casual at 23:22