“Spending a Penny”: Or The First Public Flushing Toilets - Open on This Day in 1852

Of all the technological feats and wondrous designs to come out of The Great Exhibition of 1851, there is one invention that we still use regularly today without even thinking about its ingenuity, to many, this will, at some stage or other, have been a life-saver – particularly after a lunch time drink…
At the Exhibition, a man named George Jennings, a plumber, installed his so-called ‘Monkey Closets’ in the Retiring Rooms of The Crystal Palace. These ‘Monkey Closets’ caused great excitement as they were the first public toilets anyone had ever seen, and during the exhibition 827,280 visitors paid one penny each to use them. For ‘spending a penny’, they received a clean seat, a towel, a comb and a shoe shine.
When the exhibition finished and the was moved to Sydenham, the toilets were set to be closed down. , however, persuaded the organisers to keep them open. They agreed, and the penny toilets went on to generate revenue of over £1000 a year.
After the success of Jennings’s Crystal Palace lavatories, public toilets started to appear in the streets, the first of these being at 95, Fleet Street, London, next to the Society of Art on 2nd February 1852, with one for women opening a little later, on the 11th February at 51 Bedford Street, Strand, London. These ‘Public Waiting Rooms’ contained water closets in wooden surrounds.
The charge was 2 pence entrance fee and extra for washing or clothes brushes. These new facilities were advertised The Times and on handbills, distributed around the city. These ‘Public Waiting Rooms’ however, did not become successful, and were eventually abandoned due to their unpopularity with the public, and the awkward design of the lavatory and flushing technique.
The men responsible for building and promoting ’ public conveniences – Sir Samuel Morton Peto (a building contractor who had erected Nelson’s Column and built the Reform Club, Lyceum Theatre and a few other buildings) Sir Henry Cole (one of the Great Exhibition’s principal promoters and inventor of the commercial Christmas card) thought that the scheme would be extremely profitable. It wasn’t.
Public toilets only really became popular after Mr. Thomas Crapper developed some improvements to ’ initial flushing mechanism, which promised “a certain flush with every pull”, these improvements did a lot to increase the popularity of the public toilet. Crapper also developed some other important toilet - related inventions, such as the ballcock. (He is often mistakenly credited with inventing the flush toilet, but he merely improved its functionality)
George Jennings died on the 17 April 1882 in a traffic accident, when the horse pulling his cart shied, and threw him across the road into a dust cart. He sustained minor injuries and a broken collar bone. Later, he appeared to be healing well until he suffered a congestion of the lungs and died. He was aged 72. 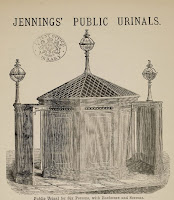 His company continued its work, now being run by his son, and by 1895, with a new improved method of flushing in place, it had provided the public toilets for 36 British towns, and they could also be found in Paris, Florence, Berlin, Madrid, and Sydney as well as far-flung destinations in South America and the Far East.
The designers, architects and engineers of the Victorian age built public conveniences to a very high standard. When conveniences were to be above ground, they were built to be aesthetically pleasing, and built with high quality materials such as marble and copper, and furnished with fine ceramics and tiles.
Not many original Victorian public toilets survive today, in they are recognizable by the fine and fancy railing work above ground, with steps leading under street-level.
If anyone knows of any surviving I’d love to hear about them.
Posted by The Amateur Casual at 02:39