“I Considered Myself the Inventor of Nocturnes Until I saw Grimmy's Moonlit Pictures.” Or: The Twilight Genius of John Atkinson Grimshaw:

Whilst I’m no expert on Victorian art, I certainly appreciate some of it, mostly the paintings of typical scenes of everyday life that show how things looked and how life was lived in the nineteenth century.
The scene painters of the age give us a glimpse into the world they lived in, and whilst not as reliable as photographs, paintings of street scenes, or important and even just average or normal places of the time, can momentarily take us there and show us what it was like to live in the time the painting was produced.
My only previous post about a Victorian artist was in October, when I wrote about Richard Dadd, (you can read that here) Whereas Dadd in himself is, to me anyway, a lot more interesting than his art, today I’m writing about a much more ordinary man, but an ordinary man who painted the most extraordinary paintings; John Atkinson Grimshaw, whose works are a joy to look at, not only aesthetically, but also as documents of the age in which he lived. His work is possibly my favourite of all Victorian art – or at least his work from the 1870’s and 1880’s – because he doesn’t paint wonderful pictures of fairies, mythical scenes or bowls of fruit (although he did at other stages in his career) but shows Victorian life as it was in the industrial cities, the back alleys, the bays and the ports and the streets of the nineteenth century.
To me, photographs and pictures of the Victorian’s environment are very important and fascinating, and I’d rather look at one painting of an empty street in at dusk than a hundred paintings of Greek Gods or Arthurian Legends. Of course, that’s not to say I can’t appreciate such pieces of work, such as Waterhouse’s ‘The Lady of Shallot’, for example, which is another of my favourites, but as a person who studies Victoriana and would dearly love to be able to go back and wander around a Victorian city in Victorian times for even ten minutes, paintings such as Grimshaw’s, and the pictures taken by street photographers of the time are the closest I will ever get.
So who was this Grimshaw?
He was born in Leeds, Yorkshire, in 1836, and when he was sixteen, in 1852, he took a job as a clerk at the Great Northern Railway office in Leeds. Leeds had several art galleries and Grimshaw was inspired by the work of artists such as Holman Hunt, Henry Wallis and William Powell Frith.
His love of art got the better of him, and he quit his job as a clerk in favour of becoming a full-time artist, a move his parents vehemently disapproved of. They were strict Baptists and strongly disapproved of his interest in painting. On one occasion his mother even went so far as to destroy all his paints. Undeterred, Grimshaw soldiered on, and in 1858 he married Francis Hubbard – known as Fanny – a cousin of the artist Thomas Sidney Cooper, after which he was able to devote himself to his hobby, and turn it into a job.
He began exhibiting in 1862, under the patronage of the Leeds Philosophical and Literary Society, mostly with well-observed and detailed still-life’s, or paintings of birds. Further success came when one of his paintings was accepted by the  , and Grimshaw started to make more money when art dealer William Agnew began purchasing his work. By the 1870s he had become successful enough to rent a seventeenth century mansion in , Knostrop Old Hall, which was perched upon a cliff-top and had magnificent views of both the north and south bays. He named their new home Castle by the Sea, after a poem by Longfellow. The mansion itself and became favourite subjects of Grimshaw’s and the move to the coast inspired a lot of his most aesthetically pleasing work. It also fed his fascination with maritime scenes of ships, docks and the sea.
At this stage of his career he painted a lot of interior scenes, with ‘Dulce Domum’ (1855) being an excellent example of his typical work through the 1850’s, but in the 1870’s he began to experiment with different techniques and subjects in his work, and had varying success with his new ideas but his big break came with the night scenes he began to paint, and for which he is best known today. In the mid-seventies he took a second house in , and there are many paintings of seascapes at night from the area. Later, he also traveled to Liverpool and  in search of material, during which period he painted one of my favourites, ‘Nightfall on the Thames’ (below) in 1880.
‘On Hampstead Hill’ is considered to be one of Grimshaw's finest pieces, showing his attention to detail, containing various sources of light all in one painting set at dusk. The chill sky and the reflections on the wet road in this painting are a testament to the skill of Grimshaw, who, it must be remembered, was a self-taught artist.
Later on in his career, these scenes of urban areas at twilight, bathed in either moonlight or the glow of street lamps became very popular, particularly with the middle classes, and indeed, Grimshaw painted mostly for private art collectors, and exhibited only five pieces of work at the Royal Academy between 1874 and 1886, and one piece at the Grosvenor Gallery.
He often painted very specific scenes in his work that epitomized the subject he was depicting. They often typified a season, city, time of day or type of weather. These intricate details give his paintings a very real and atmospheric mood and feeling. The character of the cities of London, Leeds, Liverpool and Glasgow attracted him, as well as Scarborough and Whitby, and he often returned to these places to depict them at dusk or night in his work.

In the 1880s, Grimshaw used a London studio in Chelsea, not far from a similar studio used by fellow artist, James Whistler. (Possibly most famous for his painting, ‘Mother’, which appeared in the first Mr. Bean movie.) The artists became friends, and after visiting Grimshaw, Whistler remarked that: "I considered myself the inventor of Nocturnes until I saw Grimmy's moonlit pictures."

Praise indeed. But, unlike the more impressionistic night scenes Whistler was producing, ‘Grimmy’ was painting realistic images that looked almost like photographs, giving us wonderful glimpses into the Victorian dusk and night of cities, towns and the sea.

It was in the early 1880’s that an unknown financial crisis hit Grimshaw. Following this, he abandoned his Chelsea studio and returned to Leeds. Once there, he began to paint quite prolifically, producing around fifty paintings a year. Notable works from this period include ‘Park Row, Leeds’ (1882) ‘London Bridge, Half Tide’ (1884) ‘An Autumn Lane’ (1883) and ‘Hampstead’ (1881)
As well as producing his night scenes in this period, he also began to experiment with different techniques, such as painting over photographs and mixing materials such as sand into his paints to get the effects he was striving for. He had also started to experiment with different subjects, most notably, fairies, with his painting, ‘Iris’ (1886) still being popular today. 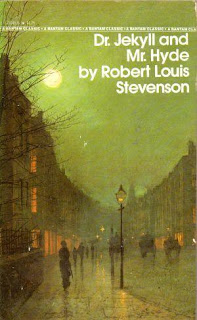 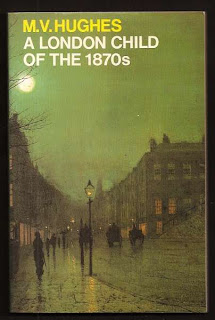 Despite his fondness for painting dirty industrial Victorian cities at twilight, Grimshaw managed to capture the beauty of the fog, mist, rain and coolness of the scenes and turn them into something poetic, and at the same time realistic. These traits have seen his paintings appear as the cover image of many books, including an edition of M.V Hughes ‘A London Child of the 1870’s’ which features Grimshaw’s ‘View of heath Street by Night’ on the cover, (as does a 1980’s edition of Stevenson’s ‘Dr Jekyll and Mr. Hyde’) A 1980’s edition of Anne Bronte’s ‘The Tenant of Wildfell Hall’ is fronted by Grimshaw’s ‘Knostrop Hall, Moonlight’  and the cover of Anne Perry’s ‘Southampton Row’ is adorned with the wonderful ‘Reflections on the Thames, Westminster’.
As well as these, Grimshaw’s work has appeared on the cover of many and various compendiums of ghost stories, and even a Sherlock Holmes book, with his paintings evoking the mood, mystery and the mist of the era.
Grimshaw and his wife, Fanny, had fifteen children together, although, sadly only six survived into adulthood, and of these, Arthur Grimshaw (1864–1913), Louis Grimshaw (1870–1944), Wilfred Grimshaw (1871–1937) and Elaine Grimshaw (1877–1970), also became painters.

In the early 1890’s, Grimshaw’s work appeared to be developing a much more free style, and taking on a new direction. He painted ‘Sand, Sea and Sky; a Summer Fantasy’ in 1892, which shows a lighter side to his work, and in 1893 he painted the detailed and yet slightly abstract ‘At Anchor’ perhaps showing that he had been influenced by some of Whistler’s work, but sadly, John Atkinson Grimshaw died of cancer in October 1893 aged only 57.
He is buried in Woodhouse Cemetery in Leeds. Little else is known about this talented character as, unlike other artists of the period, such as Vincent Van Gogh, who left notebooks, letters and sketches after they had died (which explains why we are able to have so many books detailing the lives of such artists) Grimshaw left nothing behind him after he died. No letters, journals, notebooks or papers exist, and because of this we have little more knowledge or information on the life or career of one of our recent histories most talented painters.
For space reasons I have only included a few of Grimshaw’s pieces, but you can see an attractive slideshow of all of Grimshaw’s work here
Posted by The Amateur Casual at 22:07