“…The Most Remarkable Woman in the Kingdom.” Or, The Philanthropy of Angela Burdett-Coutts

I have struggled and laboured for weeks with this post but I hope it doesn’t show. The source of my difficulty was that essentially all I had to work with as a starting point was a long list of sentences that began; “She also donated money to…” and; “She also funded the…” with a great many; “In year X she gave Y amount of money to Z charity…”
Whilst lists like this can be interesting as pure statistics, when writing about the person who funded, gave and donated, it makes for a quite dull and monotonous post. Trying to pull interesting reading from statistics is extremely hard, but hopefully, if not the most interesting post you will read, I hope that this can give a decent insight into a remarkable Victorian lady.
You may recognize the name Coutts, or the logo below, and you may even be lucky enough to be a customer of the private bank. This will not be a post about the bank or banking, but about a remarkable Victorian lady associated with Coutts; a lady named Angela Burdett-Coutts.

When she lived at Holly Lodge, Angela opened her beautiful gardens to hundreds of school children and allowed them to play there under the oak and chestnut trees, and she also used the gardens to entertain the tenants of .
In her personal life…
In 1839 Angela was introduced to the Duke of Wellington, and they became great friends. So much so that eight years later, when she was 33, she proposed to him. The Duke, aged 78 at the time, turned her down – no doubt in a most gentlemanly way – due to their difference in age. Despite this, they remained close friends until 1852 when he died.
The Church:
Angela was a notable benefactor of the Church of England, building and endowing three churches including St Stephen's in Rochester Row, and church schools. As Executor of the Will of the Reverend Chauncy Hare Townshend (the author of several volumes of poetry) she, with the Reverend Thomas Helmore (another poet), used a large sum from Townshend's estate, at his request, to build a primary school in . The School is called Burdett-Coutts & Townshend Foundation C of E Primary School.
Foreigners:
Much like the Queen, Angela avoided showing favour to any of the political parties. She gave no money to them, other than backing various government projects in which she was interested. She also approved and supported any actions by the to improve the lot of less fortunate parts of the world. When went to places such as , Africa, and , Angela’s money often followed. In she provided an institution for the improvement of the aborigines, who were seen as being a rather uneducated people. She also personally endowed the bishoprics of , and  (1847), and the founding bishopric of  in  (1857).
In her personal life…
Back in Angela’s personal life she suffered a great upset when, in 1878 her long-time companion, Hannah Brown, died. Angela was distraught and wrote to a friend that she was utterly crushed by the loss of ‘my poor darling, the companion and sunshine of my life for 52 years.’
Animals:
Back in the world of charity, men, women and children both at home and abroad had benefited from Angela’s extraordinary generosity, but still there is more; For the animals of Britain She erected four handsome drinking fountains: one in Victoria Park, one at the entrance to the Zoological Gardens in Regent's Park, one near Columbia Market, and one in the city of Manchester. At the opening of the latter, the citizens gave Lady Burdett-Coutts a hugely enthusiastic reception. She also made contributions to Mary Tealby’s ‘Temporary Home for Lost and Starving Dogs' in Hackney (Now Battersea Dogs and Cats home)
In her personal life…
Angela had been assisted for some years by her young friend and secretary, the American born William Lehman Ashmead Bartlett. William had helped her in dispensing her wealth to all these charities, and in other financial matters, but on , when Angela was 67 she shocked the public and society alike by marrying William at , Piccadilly. Her new husband changed his surname to Burdett-Coutts, and later became a member of Parliament. The marriage was a happy one.
Rewards:
In recognition of this unrivalled generosity, in 1871 Queen  conferred a peerage on Angela under the title Baroness Burdett-Coutts, of Highgate and in the . On she became the first woman to be presented with the Freedom of the City of at the Guildhall. It was accompanied by a complementary address, enclosed in a beautiful gold casket with several compartments. One bore the arms of the Baroness, while the other seven represented tableaux emblematic of her noble life, Feeding the Hungry, Giving Drink to the Thirsty, Clothing the Naked, Visiting the Captive, Lodging the Homeless, Visiting the Sick, and Burying the Dead. The four cardinal virtues, Prudence, Temperance, Fortitude, and Justice, supported the box at the four corners, while the lid was surmounted by the arms of the city.
In 1874 she was 's first woman Burgess, also being presented with the Freedom of that city.
In 1877, when word reached of the suffering through war of Bulgarian and Turkish peasants, she instituted the "Compassion Fund," which transported over a hundred thousand pounds in both money and food to the civilians, saving thousands of lives destined for starvation. For this generosity the Sultan conferred upon her the Order of Medjidie, the first woman who has received this distinction.
In her personal life…
After leading an exemplary, distinguished and remarkable life, on Lady Angela Burdett-Coutts died of acute bronchitis at her house in , Piccadilly, at the age of 92. By the time of her death she had given more than £3 million to good causes. She was buried on near the West Door in the nave of Westminster Abbey. The barony became extinct upon her death. 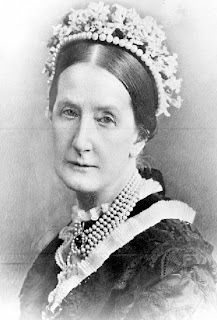 Charles Dickens dedicated his novel Martin Chuzzlewit to her and King Edward VII is reported to have described her, "After my mother (Queen Victoria), the most remarkable woman in the kingdom."

Addendum: The ‘Charity C.V’ of Angela Burdett-Coutts:
Angela’s charitable and philanthropic earned her the nickname of the "queen of the poor" and if we break down her “C.V” and look at things she did that I have not gone even mentioned, you can easily see why.
Take a deep breath:
Philanthropists are something that we sadly don’t see very often in these days, and I doubt the like of Angela Burdett-Coutts will ever be seen again upon these shores.
Posted by The Amateur Casual at 05:18