“We Have Trained 30 to 40 Women of Varying Nationalities Since 1912...Our Belief is, it is Character Not Colour that Counts.” Or: The Lost Midwifery Hospital of Annie McCall:

It’s not uncommon today to see unmarried couples with children. Labour leader Ed Miliband and his wife Justine were only married this year, despite already having children. Less and less people today, in fact, are getting married than even thirty years ago, let alone a hundred and thirty years ago.
Last year, the Office for National Statistics released this graph showing the decline in marriages over the last three decades: 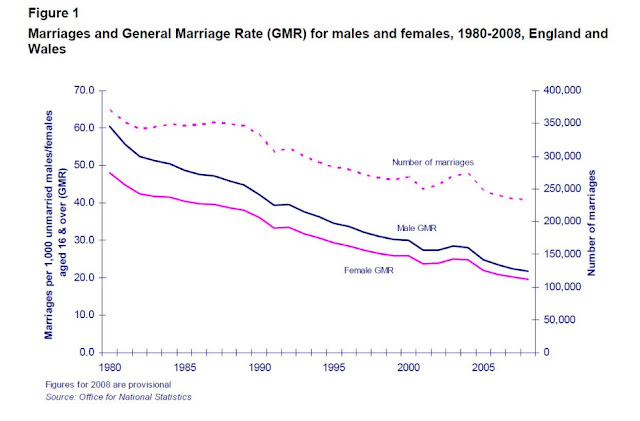 But in the nineteenth century, having children without being married was virtually unthinkable. If families were to discover that an unmarried female family member was pregnant, she could find herself cast into the streets, where the fork in the road led either to the workhouse or suicide.
But it wasn’t only unmarried pregnant women who faced danger. Even the morally virtuous woman who fell pregnant by her husband faced peril during childbirth, in an age of many technological and medical advancements, the standards of hygiene and healthcare we are used to today were still years away.
Women giving birth – which would be done at home – could expect the assistance of a midwife to guide them through the process, but if her family was restricted by their finances, the help would come from friends or family, either sisters, mothers or even grandmothers.
The Victorian era, therefore, was a difficult time to give birth. Aftercare only really existed if you were higher than working class, as a working class woman was expected to be back at her duties in the home – along with her new motherly duties – within a few days of having the baby.
The absence of a doctor during the birth meant that if woman did suffer some condition or trauma during the birth, it often went un-noticed, leaving the new mother to try and recover, completely unaware that she may have suffered permanent damage to her body. Often, this damage, or any condition it caused, made future childbirth quite dangerous to both mother and baby, but with contraception all but non existent, and virtually completely non-existent to the working classes, it was not unusual for families to have between five and ten children. If the mother was lucky, that is.
The plight of women of nineteenth century during childbirth was recognized by one Dr Annie McCall.
Annie was born in Manchester in 1859 and even as a child she knew she wanted to go into medicine, and was encouraged and supported by her mother, who provided her with an excellent education.
Annie traveled across Europe, studying in in , , Berne in and , before arriving at the London School of Medicine for Women.

When she graduated from LSMW in 1885, she became one of the first women to qualify as a doctor, and set about providing the city with more qualified midwives by establishing a of at her home, 165, in Stockwell, .
Four years later, in 1889 Annie, along with Marion Ritchie, founded the , at 41 – 43 Jeffry’s Road, Clapham, which provided excellent antenatal and postnatal clinics. This was also the first maternity hospital to be staffed entirely by women. Doctors, midwives, maternity nurses and also students were all female. This was important to patients in an era of modesty, when, if a male doctor was called to assist a woman in childbirth, he was not allowed to ‘look down there’.
The hospital took in all women who needed attention during childbirth, including poor women, and unmarried women. Suddenly for ’s ‘disgraced’ women, that fork in the road had become a trident.
They now had the option of receiving the best care in the city, from trained experts. Annie’s attention to detail was such that each patient received a manual;
‘What to do to have a Healthy Baby’
This manual contained all sorts of advice from the diet the pregnant woman should stick to prior to birth, to the kind of exercise she should be taking.
It wasn’t only the women of that Annie and her team cared for. The hospital also trained women to go and work abroad. Speaking to the National Council of Women in 1933, Annie said;
“We have trained 30 to 40 women of varying nationalities since 1912, and are surprised to find we are the only hospital with practical experience on the subject. Our belief is, it is character not colour that counts.”
In terms of her practices in health and hygiene, it could be said that Annie was very much in the same mould as Florence Nightingale. She, too, was a pioneer of cleanliness within the hospital, and her high standards, not just in this, but in the care given to patients certainly worked.
In fifty years of maternity care, the hospital dealt with 52,993 women, only 85 of whom died. For the time, these success rates were excellent.
In 1915 the Hospital moved to a new building in , and was renamed the in 1936. In 1938 it was expanded when 39 Jeffreys Road was purchased, giving the hospital the capacity for fifty beds for in-patients.
In 1940, during the second world war, the hospital suffered severe bomb damage, which resulted in it being closed down. Annie retired in 1941 at the age of 82, but was still around to see her work continued in 1948, albeit on a smaller scale, when a house connected to the hospital provided three beds for patients, and the antenatal clinic services resumed. Due to a lack of space in the house, a district midwifery service was also utilized, in which midwives attended women in their own homes.
Annie’s hospital was taken over by the newly formed National Health Service in 1948, but Annie would miss all the rebuilding that would be carried out, as she died in 1949 aged 90, but her work would continue, as her hospital was rebuilt in the fifties, and by 1954 could boast 36 beds for patients – not quite the fifty it had at its disposal when the hospital was at its peak, but it was getting there.
After 81 years of excellent work and service to women, the closed in 1970. The old hospital was left empty by Lambeth Council for over twenty years, but now is the home of a local arts group, Stockwell Studios, who wish to stay in the building and see it preserved.
You can see if you can help, by visiting their website www.stockwellstudios.org.uk
Thanks to Veronika, of the website of London’s lost hospitals for pointing me in the direction of information regarding Annie McCall and her hospital. Click here to go to Veronika's site.
Posted by The Amateur Casual at 00:03