‘‘The Queen is Slowly Sinking” Or: The 110 Year Anniversary of the Death of Our Greatest Age:

On 1st January 1900, Queen sat in her writing room at her desk in Osbourne House on the . She was 80 years old and in her sixty-third year as Queen of the and and her twenty-fourth as Empress of India. She opened her journal knowing that she was in the final stages of life. She wrote:
“I begin today a new year and a new century, full of anxiety, and fear of what may be before us! May all near and dear ones be protected. I pray that God may spare me yet a short while to my children, friends and dear country…”
“A short while” she was indeed to be spared, and she saw in another new year twelve months later, but by then, all was not well with the ageing matriarch. The first entry in her journal for January 1901 was:
“Another year begun and I am feeling so weak and unwell that I enter upon it sadly.” 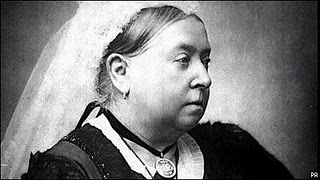 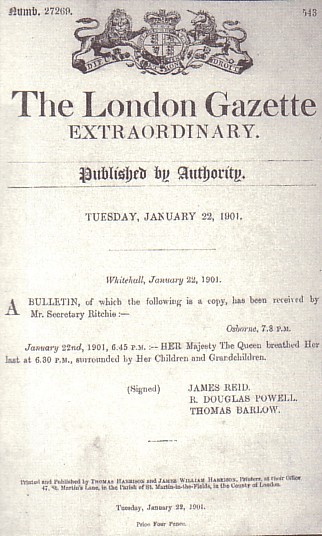 The Queen’s death – due to the somewhat ‘rose tinted’ circulars issued to the press in the last few months of her life – came with seemingly little warning and caused huge shock to her subjects. The whole of the Empire was unsettled by the news. To us it may seem strange that her death had not been considered; she was a very old woman in an age where life expectancy in some cases was half of what we see today, and yet, despite her being that old, nobody appeared to have ever thought of, or even contemplated her not being there. She was a monarch that people had grown to depend upon; true as the sun will rise in the morning, the Queen will be on the throne.
For 64 years she had been Queen; most common Victorians could only dream of even living that long. In an ever changing world, the Queen was one constant.
All over the country, upon hearing the news of her death, people wept openly in the streets. The whole country was overcome with an immense sense of loss and fear for the future.
There was a mass outpouring of mourning. All adults dressed in black, banners of black and purple banners hung from shop windows and public areas where anything was painted black, such as iron railings were given fresh coats of black paint.
Eyes turned to the forthcoming funeral.
The Queen had often contemplated her death and thought of her funeral. Her wishes were for a Military style funeral as she was the head of the British Army.

On the 1st February 1901, the coffin of Queen started its journey to her final resting place in , leaving Osbourne for the Royal yacht, , where it sailed to , accompanied by the sound of gunfire from the warships in the . The Prince of Wales, Albert Edward – now King Edward VII at the age of 61 – followed behind. From there, the coffin was to make its way by train to – appropriately arriving at station on 2nd February.
In , immense crowds gathered about the station as the coffin – carried by gun carriage and decorated with the Imperial Crown, orb, sceptre and the collar of the Order of the Garter – made its procession through the soldier-lined streets. Behind the coffin followed the New King; Edward VII, along with a huge list of dignitaries from all over the world including the Queen’s Grandson, Kaiser Wilhelm II, King George I of the Hellenes, King Carlos of Portugal, King Leopold II of the Belgians and Archduke Franz Ferdinand to name a few. It was estimated that well over a million people from all classes and backgrounds had descended to to bid farewell to the Queen. 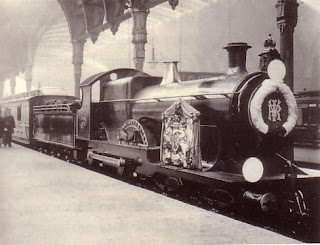 Princess Maud noted that despite the vast number of mourning subjects in , not a sound emanated from the crowds as the coffin passed them. From , the coffin would travel to Winsdor on the Royal train from Paddington station
On 4th February crowds gathered in Windsor and wept as they watched the gun carriage carry the Queen's coffin from the train station to Windsor Castle, where it was to lay in state in the Albert Memorial Chapel. From there, the Queen was accompanied by her family to the mausoleum where she was to be laid to rest next to her husband, Albert, who had died 40 years earlier - an event the Queen had mourned for the rest of her long life. After a moving service and the Blessing in the Mausoleum, the Royal family passed in single file over the platform overlooking the grave containing the two coffins of Victoria and Albert side by side. The new King knelt by the grave with his wife and young son, in silence for a few minutes, before walking on.
A white stone figure of the Queen had been sculpted by Baron Marochetti at the same time as he had sculpted the figure of Prince Albert which had lay upon his grave since his death in 1861. The figure of the Queen had been stored, laying in wait for her death for forty years, until now. The figure of the Queen was placed on the tomb so that Queen Victoria’s face was inclined to Prince Albert, the love of her life, with whom she was, at last after forty long years, reunited.

The subjects of the old Queen had followed many of her fashions, one of which being extensive mourning. As the public geared up for a long period of wearing black in honour of Victoria, her son King Edward VII limited the period of mourning for his mother to three months. 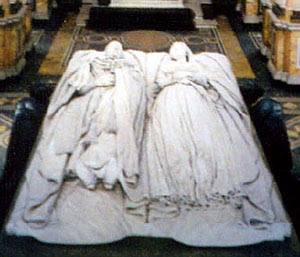 When mourning finished, the empire the old Queen had presided over reflected on its past and contemplated its future. The Boer War, which had not been going particularly well for  the British, appeared as a metaphor for the state of the Empire in general. The military, which had conquered vast swathes of the world over the last century, now appeared incompetent, along with the politicians in government. 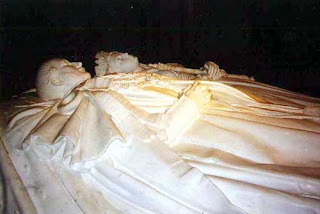 The Queen’s death appeared to signal the end of the all-conquering British mentality, particularly in government, where things were not going completely according to plan in  or , which would soon lead to huge reforms in the former, and the Empire losing the latter. Even further down the line, the First World War would rock the vulnerable Empire even further, and lead to future events that would eventually see the  diminish and crumble. ’s reign was a reign of no compromise in any quarter – military, political, scientific and social, and an age of so many advances that we are certain to never see its like again. The reign of Edward VII, from 1901 (official coronation in August 1902) until his death in 1910 meant a new era, and one which would be completely different to all that had gone before.
It’s interesting to read what the newspapers said the day after Queen  died. Not only did they love the Queen, but there was a huge sense of pride and patriotic feeling for her era. The Times, in particular did this well, with an article I have posted below this one as a separate blog post; I didn’t want this one to be over long…
Today, 110 years after ’s death the Empire is no more, and depending on which commentators or papers you read,  is, and has been for a long while, the desperate little sibling of all powerful . It seems that with the death of the empire, the patriotic nature of the country suffered a fatal blow, and suffered until it eventually died out some time between the 1960’s and 70’s.
Of course, we are currently subjects of a long-reigning and elderly Queen, but the monarchy certainly doesn’t seem to be held in the high regard it was during ’s reign, and quite possibly never will again. It seems to me a sad fact that once Queen Elizabeth passes, the Royal family ties that connect her to  will be so diluted, antiquated and distant that the dissolution of the monarchy may be a step closer.
The kind of grief we saw when Princess Diana died is probably the only thing I can think of in my lifetime that may have come close to replicating the scenes in London in February 1901 as Queen Victoria made her last journey, and from exploring history, the death of Churchill in 1965 may be ‘in third place’ to put it crassly, but It will be interesting to see the scenes that take place when Queen Elizabeth passes on – a Queen who, in many ways is very similar to Victoria in terms of age and length of rein. Having said that, I must also add that I hope her reign lasts many a year from now.
Who knows what the country will be like when the Prince of Wales succeeds his mother to the throne (if he does) and mirrors the ascension of Edward VII – both men having waited a terrifically long time to become monarch. The country is certainly in a period of uncertainty and vulnerability – just as it was in 1901.
The ‘Hero’ of the story, Sir James Reid would, just over nine years later, be present at the death of the man by whom he stood as his mother passed away – King Edward. Just as with the death of Queen , Reid kept detailed and extensive notes over the course of the King’s four-day illness until his death after four days on 2nd May 1910.
Although he would remain with the Royal Family after Edward’s death as Physician-in-Ordinary to George V, his role as medical advisor to the Royal Family gradually ceased, although he remained a close friend to the Royal family, most notably to Queen Mary whom he attended in Scotland at Balmoral, the two becoming good friends who would ride out in carriages together and visit the tenants and cottagers, often taking tea. Sir Bertrand Dawson, a younger man, was Reid’s replacement as doctor to the monarch, and was the physician used most by George V.
In June 1923, James Reid suffered an attack of phlebitis – inflammation of a vein – and died five weeks later on 29th June at the age of 73. Lord Stamfordham wrote in The Times:
“Among the remarkable men of the later Victorian group, Sir James Reid stood somehow or other by himself. The niche which he created and filled remains in the truest sense inimitable”.
Posted by The Amateur Casual at 02:34